“Orbiting above the planet, Neil Armstrong closed one eye and with his thumb canceled out entirely the Earth as if it were an ordinary postage stamp, commenting without any words on its diminutive size and vulnerability.”

This action described in the reading of putting your thumb over the Earth and completely covering it instantly reminded me of one of my favorite romantic movies, Dear John. One of the main 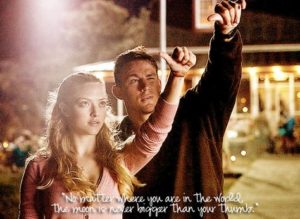 characters states, “it doesn’t matter where it [the moon] is in the sky, where you are in the world, if you hold one of your hands up and close one of your eyes, it’s never bigger than your thumb.” While John, a soldier, goes away to war, this is one way he stays connected and close to his girlfriend, Savannah, along with writing letters. This scene just puts how we view the moon and other planets into perspective. We look at them as inferior or smaller or almost nothing. But as stated above, that is exactly how Earth is viewed from the moon.

Physically leaving Earth allows people to take a step back and obtain a broader and bigger picture of the universe. People tend to think that Earth is primary and superior to everything else since we occupy it. Leaving the surface and entering space, where all the planets and systems can be observed, grounds these people and exposes them to the truth. They can now understand that Earth is just one small aspect of all of space. Of course it contributes to space, but so do the other planets, and stars, and comets, and asteroids, and meteors, and black holes, and so much more. This relates to the psychology perspective of the Gestalt theory. He emphasizes that the whole of anything is greater than its parts. The whole of space is greater than one of its parts, Earth. It’s just crazy to think about how small our planet is in comparison to the entire universe.

While it’s interesting to think about space and Earth in the Gestalt psychological perspective, it is extremely important to view Earth on a smaller level as well. “Before we try to act or ‘think cosmologically,’ we had better learn to ‘think globally’ or even ‘think like a mountain.'” Because of human interaction and poor treatment of the environment, Macauley states how people must first acknowledge the elements around them and learn to respect and protect them before anything else. Once someone truly embraces the mountains or trees, they can then move onto the global perspective. Once the global perspective is mastered, then space can be studied. I think this is extremely important because, as Macauley also accentuates, Earth is currently the only habitable planet so we must treat it as “our haven, our harbor, our home.” However, it isn’t bad to begin looking into space because the human race is destroying the planet and it doesn’t seem like there’s going to be great improvement anytime soon. “Space travel may reasonably be the next step in our evolutionary advancement.” Soon enough, if we don’t find another habitable planet, the human race will be eliminated.

Also, a specific line that sparker some childhood memory was, “given that outer space is by its very nature EXTRA-TERRESTRIAL…” It’s sorta related but reading it definitely made me laugh because it reminded me of the song E.T. by Katy Perry which me and my sisters would sing when we were younger.