After reading the section on Snow and Ice, the part that stood out to me was when the author mentioned polar bears. I find polar bears to be such majestic creatures, and even though I would not want to mess with them, it would be such a tragedy if they went extinct. Since the average temperature of the earth is rising, glaciers are melting. These glaciers are so crucial to polar bears, and they rely on them immensely. Due to this melting ice, these polar bears will likely starve. Polar bears eat mostly seals and hunt them through holes in the ice when the seals surface to breathe. With the ice melting, there are fewer places for the polar bears to hunt, and they are slowly starting to starve. According to Macauley, “… two-thirds of the 22,000 polar bears will be extinct in the Arctic by the year 2020″(Macauley). It is so crazy that a majority of polar bears may be extinct in a matter of thirty years if we do not do something about the melting ice and global warming. I mean, look at them, who would want them to go extinct? 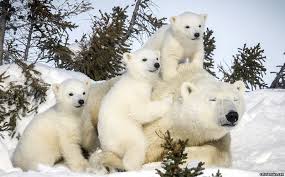 This entry was posted in ice, snow, Uncategorized, Water. Bookmark the permalink.