Posted on November 6, 2020 by bfranchino

I find it especially interesting how the heat and the cold could be related to deities or other beings in myths, stories, shows, etc. Greek mythology, heat can often be related to Helios or Apollo who are gods of the sun while Boreas was the Greek god of the cold north wind and the bringer of winter. This really shows that instead of interpreting these changes in climate as a natural thing they seemingly personified it and gave it the form of a deity who can either be blessing them with an ample amount of this weather or may be inflicting these severe climates as punishment. I also find it interesting how in modern times, the heat and cold are still personified, but often in a way that is not related to a religion. Some examples of this can be the Heat Miser and the Snow Miser from holiday special, The Year without a Santa Claus, Jack Frost who is a personification of frost, ice, snow, sleet, winter, and freezing cold, and Shoto Todoroki who is an anime character from My Hero Academia, who has the ability to control both ice and fire(needing both to keep the other one from completely freezing him or burning him). Through characters like these, we can see how we sometimes like to personify these climates with characters that are either cold hearted or kind, hotheaded, or a combination of both. 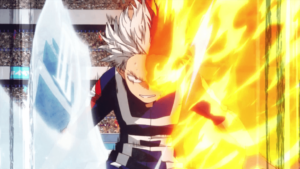