Shadow puppetry has been around for thousands of years and originated in China and India. In America, we often use our hands to portray different shapes and animals, but it is different across other cultures. In China, there are shadow shows depicting folk tales and legends of the past. In Indonesia, shadow plays are an essential part of their culture. Traditional shadow puppets are also different than ours in America. Here, children often use their hands to make different shapes. However, in many other cultures, shadow puppetry are works of art. They are usually built out of leather and are created carefully. Below I have inserted some examples of these shadow puppets.

One aspect of shadow puppets that I found very interesting was how they require both light and shadow. I found this relevant to our reading because of this. Light is necessary because the puppets are places between light and a screen to create these shadows. Without light, these shadows would not exist. 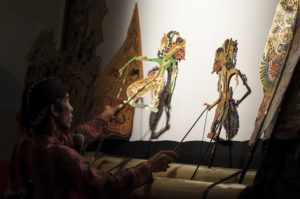