Description: Water is known as the symbol of life and wealth in Chinese culture. The water flowing inwards represents riches pouring in, thus the name Fountain of Wealth.

Description: The bridge will further beautify the city and showcase Seoul’s (capital of South Korea) eco-friendliness, as the water is pumped directly from the river itself and continuously recycled. 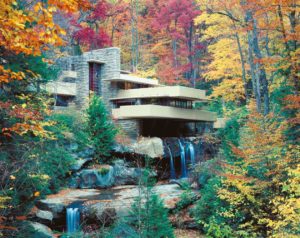 When I read about “fallingwater” I was very intrigued and excited to see a picture of it. I was in complete awe and admiration when I originally saw it. It’s as if the house is sitting on the water and it’s like having a mini waterfall in your back/front yard. This is the dream house and I would love to live somewhere like this. It’s just beautiful and breathtaking. Being in the wilderness surrounded by trees, free flowing water under your feet, isolated from fast-paced lifestyle….just perfection.

“Bottled water is no safer than drinking ordinary tap water.”

Purification process is questionable as it is “not even clear” what exactly is being gained or lost with filtration.

These ideas in the book actually made me laugh because I have come across so many people that refuse to drink tap water, yet filtered water isn’t necessarily safer. With that being said, I believe it is better to accept tap water because of the extreme amounts of plastic water bottles require. 1.5 million tons of plastic are needed to make water bottles each year, less than 25% of it is recycled, and it takes roughly one thousand years to break down. Excessive amounts are produced, the substance isn’t disposed in the right way, and it gets stuck in the environment for extended periods of time. This combination is one major thing contributing to the destruction of the environment. If more people used tap water rather than bottles water, the world would simply be a better place.

As discussed in the book, capturing an image of earth was both a good thing and a bad thing. It is good in the sense that people can see the planet they are inhabiting and admire it as a valuable entity. However, it is bad because people now say they “understand” their planet and overlook it, which makes sense if you think about it. When someone finds a new interest or mysterious concept, they can become completely indulged and determined in studying and  absorbing every aspect of the entity to be able to explain it. But when the individual completes their study or reaches their goal, they can become bored by the concept and move onto something else. That is exactly what happened with the earths elements and earth as a whole. People became intrigued in understanding the natural aspects of the natural world around them and seeing the entirety of the planet they lived on daily. When that was achieved with space travel, it was obviously remarkable, but people also internalized the fact/image and moved on with their lives. As a result, earth was overlooked. Honestly, it would have been better off if earth wasn’t captured in an image and remained a mystery because maybe people would respect and protect the planet since the other planets and potential forms of life wouldn’t be known.